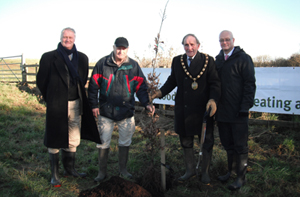 A tree was planted on Friday by Nestlé UK & I Chief Engineer, Richard Martin and Councillor Michael Bale, Chairman of South Derbyshire District Council to celebrate the start of the construction phase of The Environment Agency’s River Dove flood scheme.

The £5.1 million flood risk management scheme for the lower reaches of the River Dove is being developed by the Environment Agency, with a significant financial contribution from Nestlé who donated £1.65 million contribution to the scheme based near its Tutbury factory.

Following a presentation about the scheme from Steve Morley, Environment Agency Area Manager, the tree planting took place on Thistley Meadow Nature Reserve.  The Environment Agency has worked closely with the Dove Valley Community Project, a community partnership who own this local nature reserve, throughout the development of the flood scheme.

Once complete, the Lower Dove flood scheme will reduce the risk of flooding to more than 1,600 properties in Scropton, Hatton and Egginton in South Derbyshire. Construction of the scheme is due to be completed in autumn 2013.

Fiona Kendrick, Nestlé UK CEO and Chairwoman, said: “Nestlé is delighted to offer its support by making a £1.65m contribution to this project. As a major UK manufacturer we always seek to invest in the communities in which we operate. Having been in Tutbury since 1901, we know how important it is, not only to our factory, but the wider South Derbyshire community, to ensure properties are protected from the threat of flooding in the future. As well as financial support, we have also worked in partnership with the Environment Agency on the new Salt Brook which performed very well in the recent floods.”

John Buckingham, Environment Agency Operations Manager, said:  “Working closely with the local community, a significant amount of work has already taken place to get this project to the construction stage. At present over 1,600 residential and major commercial properties in this area are at risk of flooding, as well as roads and the Crewe to Derby railway line. This flood defence scheme will provide around 5km of new and improved flood defences, which will significantly increase the standard of protection against flooding for local residents.”