Sorry, you need to enable JavaScript to visit this website.
Skip to main content
Back to Press releases 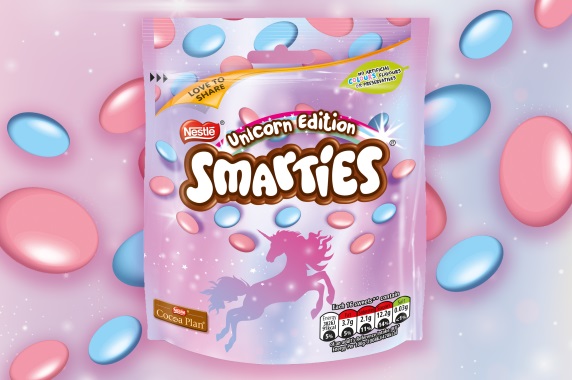 Special edition sharing bags of pink and blue Smarties will be hitting shelves next week as part of the seemingly unstoppable, global craze for unicorns.

These colourful, mythical creatures are a big deal right now and have been appearing all over the world as food and drink, clothing, nail-art and even tattoos, all shared in vibrant colours across social media.

Smarties has been one of the UK’s most colourful confectionery brands for more than 80 years so it’s only right that you can now get these legendary sweets in a legendary unicorn styling.

The sharing bags are a mix of delicious pink and blue Smarties in a trendy pastel-coloured sharing bag sporting a unicorn design.

“We are really excited to launch Unicorn Smarties sharing bags which are right on trend for all of those completely under the spell of the unicorn craze to share with their families and friends.

“Smarties is all about the colour and, if you are a fan of the colourful world of unicorns, then these are your perfectly Instagramable summer accessory for everything from road-trips to creative baking.

“And even if unicorns aren’t really your thing then that’s OK too because it’s still the same delicious taste of Smarties once you open the bag.”

The introduction of these limited edition Smarties follows wildly popular launches for orange flavoured Smarties in a variety of special formats beginning with giant tubes last Christmas and now available in sharing bags.

Unicorn Smarties are exclusive to ASDA stores across the country and will be available from Thursday 14th June.

Unicorn Smarties are just the latest in a line of new products launched by Nestlé in response to growing trends. These include the premium brand Les Recettes de L’Atelier introduced in January and a KitKat made with Ruby chocolate which appeared in April.

Chocolate covered in a sugared shell is one of the oldest forms of chocolate sweet in the world. The name Smarties has been around since 1937 when Rowntree’s renamed a product that had previously been known as Chocolate Dragée or Chocolate Beans.

Smarties remain incredibly popular to this day and their array of vibrant colours have been manufactured without artificial flavours or colouring ever since 2006.

Nestlé’s Smarties are made with cocoa from the Nestlé’s Cocoa Plan, an initiative that helps cocoa farmers make better use of their land, and improve social conditions for farmers and their families http://www.nestlecocoaplan.com/