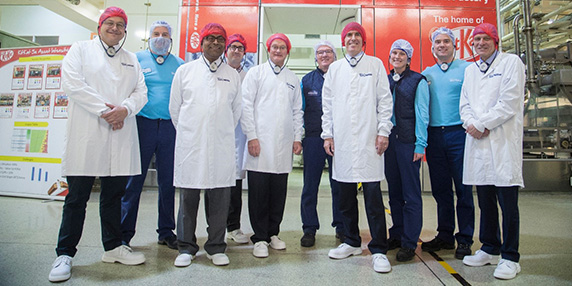 The Minister heard about the factory’s drive to continually improve its global competitiveness, and discussed UK Industrial Strategy and Brexit with the Nestlé team.

The Minister was later given a behind the scenes tour of the KitKat factory, where up to five million of the chocolate and wafer bars are made every day. Speaking during the visit, Ian Rayson said: “We were pleased to welcome the new Defra Minister David Rutley to York and Nestlé. Our York factory is a great example of a world class manufacturing site in the UK that exports to countries around the world.

“Over the past 30 years we have invested more than half a billion pounds in our York site, which is also the home of our global confectionery R&D centre.”

Food Minister David Rutley said “It was exciting to see first-hand the innovative techniques used at Nestlé to produce not just iconic brands but new foods for the global market.

“Yorkshire is home to some of the UK’s leading food manufacturers and I am looking forward to working closely with Nestlé and other members of the industry in the region to ensure that Yorkshire continues to fly the flag for quality produce, not just at home but around the world”.

Around 2,500 people work at Nestlé's York campus. 2018 has been a very busy year for Nestlé’s York business with new and innovative products, including Milkybar Wowsomes which is part of Nestlé’s innovative sugar reduction technique and contain 30% less sugar than similar chocolate products and contains no artificial sweeteners, preservatives, colours or flavourings. Such products are developed in York by the Nestle R&D centre.

Nestlé is the world’s largest food and drink company. With more than 2000 brands ranging from global icons to local favourites, we are present in 191 countries around the world.
https://www.nestle.co.uk/ – Follow our UK and Ireland team on Twitter: @NestleUKI

2018 has also seen new and innovative confectionary products like Les Recettes de L’Atelier, KitKat Senses and KitKat with ruby chocolate hitting the market. All were solely or partially developed in York by the Nestle R&D centre.

Nestlé recently announced its opening a new employee gym as the centrepiece of further improvements at Nestlé’s York campus on the city’s Haxby Road. The addition forms part of Nestlé’s wellness strategy and will give employees access to onsite health and fitness facilities 24 hours a day, seven days a week. The upgrade comes on top of the investment revealed earlier in the year when improvements including a new employee restaurant were unveiled at the site.