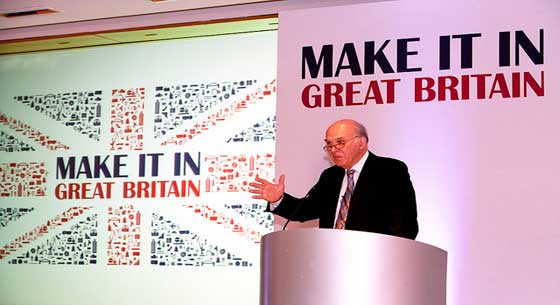 The exhibition is the culmination of the Government’s Make it in Great Britain campaign and will feature a mix of displays from 39 businesses of all sizes. The campaign was launched last year to change outdated perceptions of manufacturing, including dispelling the myth that the UK ‘doesn’t make anything anymore’.

Nestlé will be showcasing a digital display called Make it Your Future, which will allow visitors to see what it is like to work for the company and the opportunities available to young people to start a career in food manufacturing.

Business Secretary Vince Cable said: “Generating £137bn each year and employing 2.5 million people, manufacturing is a vital part of the UK’s economy. Perceptions of the industry are outdated and need to change if we are going to attract the talent needed to support manufacturing in the long term. Both Government and industry have a role to play, which is why we launched the Make it in Great Britain campaign and are hosting this exhibition.”

The Business Secretary joined Business Minister Mark Prisk to launch the Make it in Great Britain Exhibition, which is taking place for six weeks during the Olympic and Paralympic Games.

Business Minister Mark Prisk said: “I’m delighted to launch this exhibition, as it will showcase some of the exciting innovations of today. We have a mixture of iconic names, but also small and medium sized businesses that have come together to show the public what modern manufacturing is all about.

“There is a range of rewarding career opportunities available, requiring advanced skills and expertise. I would encourage people to come along to the exhibition and see first hand what manufacturing can offer them.”

Nestlé UK&I Chairman and CEO, Paul Grimwood added: “We are delighted that we are part of the Make it in Great Britain exhibition, and feel very proud to be representing the food manufacturing industry. Nestlé has been operating in the UK since 1886 and the exhibition gives us a chance to show people what an exciting industry it is to work in.

“Last year we launched the Nestlé Academy which offers flexible career paths across the Nestlé business and I hope visitors to this exhibition will be inspired to apply for the varied roles we offer in food manufacturing.”

Entry is free to the Make it in Great Britain exhibition which will be on display until 09 September 2012.

In the UK, the company manufactures some of Nestlé’s most popular and iconic brands, including KIT KAT® (the UK’s No 1 selling biscuit), QUALITY STREET®, NESCAFÉ®, SHREDDED WHEAT®, BUXTON®, NESTLÉ® PURE LIFE® water, SKI® yoghurt and BAKERS and FELIX® petfood.

For more information on Nestlé in the go to www.nestle.co.uk

Make it in Great Britain: