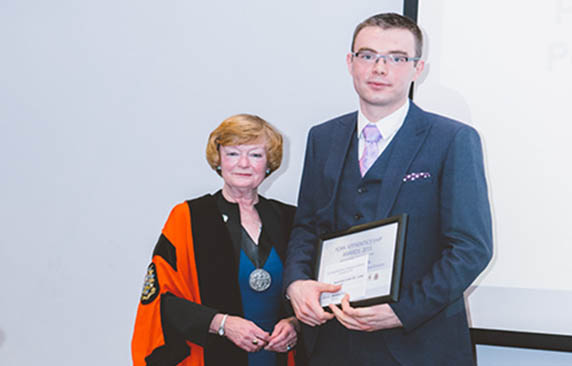 Nestlé York Engineering Apprentice, Matt Tarn, has scooped the ‘York Apprentice of the Year’ (aged 16-24) award at a prestigious ceremony held last week. This is the second year in a row that a Nestlé apprentice has won, with Jordan Philips winning the award last year.

Facing stiff competition from a wide variety of apprentices, the judges were particularly impressed with Matt’s dedication to promoting apprenticeships externally and his outstanding work with young people to encourage them into careers in engineering.

Matt works directly with the multimillion pound processes, machinery and software infrastructure for some of the nation’s most popular brands such as KitKat and Polo. Whilst working for Nestlé UK, Matt has continued to build strong working relationships with local schools enabling the company to tap into future talent for the business and food and drink industry.

Matt completed his four year apprenticeship in September this year and as a result of his diligence, hard-work, drive and innovation he has been contracted to study for a Higher National Diploma (HND) in Engineering and a fully funded degree, underlining Nestlé’s commitment to ensuring future talent grows to its full potential.

Nestlé UK Engineering Apprentice, Matt Tarn said: “I am delighted and honoured to win the ‘York Apprentice of the Year’ Award. It really means a lot and the award has topped off a great year on my apprentice journey.  My engineering apprenticeship has given me the opportunity to work with some phenomenally knowledgeable and talented people at Nestlé, and they’ve really helped me to learn. I look forward to continuing my career at Nestlé”.

Julia Massey, Learning City Partnership Manager, City of York Council said: 'Matt is a well-deserved winner of the York Apprentice of the Year 2015 Award. Through the activity of the Council-led York Apprenticeship Hub, we are totally committed to increasing the number of opportunities for talented people like Matt to support business growth in the city. Last week's celebrations with graduating apprentices, their friends, families and employers also celebrated the recent news that York was named as the sixth best performing local authority in terms of growth in apprenticeship starts. Nestlé play an important role in contributing to this growth.”