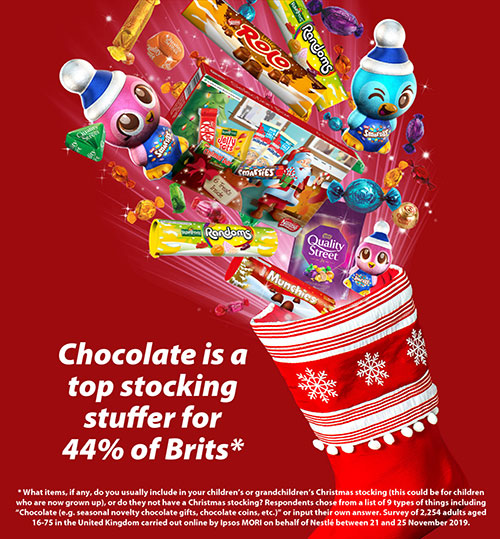 We’re sweet on Quality Street
The survey found that when it comes to festive tins of sweets and chocolates, 73% of adults most associate Quality Street with Christmas1.

Ellie Worley, Senior Brand Manager for Quality Street said: “Quality Street has been a part of British Christmases for more than 80 years and the brand continues to combine tradition with innovation. Whether you love the Green Triangle, Toffee Penny or any of the other chocolates in the selection, we think there really is something for everyone, and that’s why the purple tin has become so symbolic with the festive season.”

Jonathan Smith, Senior Brand Manager for Christmas confectionery added:  “We’re delighted that three quarters of people associate Quality Street with Christmas. It’s a much-loved part of Nestlé’s festive range, which also includes Milkybar, Smarties, After Eights, Rowntree’s Fruit Pastilles and Randoms - all of which come in tins, tubs and tubes that are made for sharing at Christmas!”

Choc stuff
Chocolate remains a popular stocking stuffer, with 44% of Britons adding chocolate to their children’s or grandchildren’s Christmas stockings4. It’s a particularly popular choice among women, with 49% opting to include chocolate compared with 39% of men.

Sharing the foils
Only 35% of Britons said they would usually let others pick first when sharing a box of chocolates with family, friends or colleagues at Christmas. 12% went further – saying they would pick out all their favourites before they get chosen by others.
A big no-no when it comes to sweet-sharing etiquette is putting the wrappers back in the box– one in three (32%) said they hate it when others do this. However, only 5% of respondents admitted to popping the wrappers back in themselves.

Christmas come early?
Among those who have an advent calendar, Generation Y are more than twice as likely (41%) to open it early compared to other generations (18%).

And while seven in ten people (70%) usually buy chocolates or sweets for immediate family5 at Christmas, a significant number of treats may not reach their intended recipient – 43% of Brits admitted to eating chocolate or sweets they were supposed to gift to someone else.

Regional differences
There are some clear regional divides when it comes to sharing Christmas chocs: