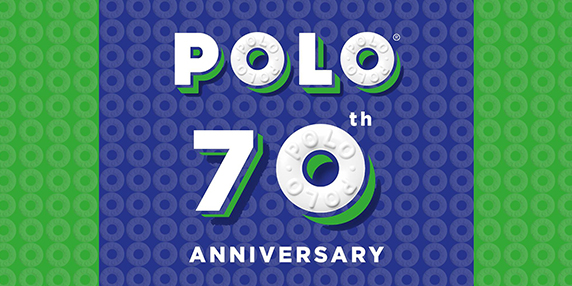 One of the UK and Ireland’s most iconic mints is celebrating its 70th anniversary. Polo, ‘the mint with the hole’ was conceived by the confectionery legend, George Harris, who was the great man behind some of Rowntree’s biggest brands in the 1930s including KitKat, Smarties, Aero, Black Magic and Dairy Box – a golden age of confectionery.

The idea for the mint was developed in the late 1930s, but due to the Second World War and sugar rationing it was shelved. However, in 1948 George Harris was determined to resurrect the idea. 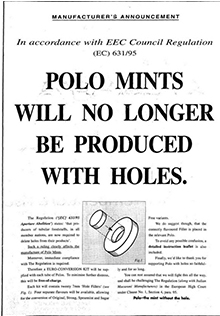 Before the war George had been inspired by the US brand Life Savers (a mint with a hole designed to look like a life-saving rubber ring) and had decided to make something similar in the UK. Company legend has it that he chose the name Polo because it derived from Polar and he thought that this implied the cool freshness of mint.

For many, it is the TV and print ads from the 1980s/90s that people remember. The TV ads included the Mint with a Halo and Conveyor Belt, often with the unmistakable voice of Peter Sallis.

In 1995, Polo famously announced, on April 1st, that "in accordance with EEC Council Regulation (EC) 631/95" they would no longer be producing mints with holes.

This year, still in mint condition, to mark its 70th anniversary the brand is launching its Instagram and Facebook accounts where fans can find interesting facts from Polo’s history and latest news about their favourite mints.