Beryl raises a (coffee) cup to 80 years of Nescafé 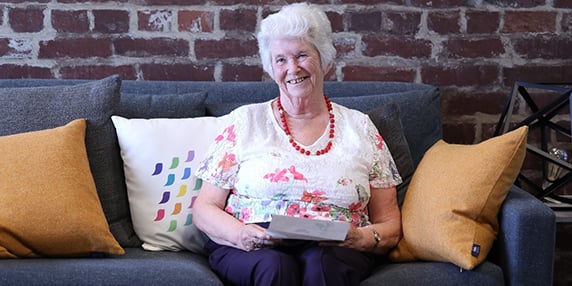 Beryl said: “Nescafé Original has been around me all my life – it’s the smell of it as a child and drinking it all my adult-life – it is a long-time friend that has always been there for me. I didn’t think I would hear anything back so it was a big surprise to get a box of gifts and asking if they could share it to other Nescafé fans.”

Born one year before Nescafé Original was launched, Beryl Chaplin’s poem highlights the role the coffee brand has played in her life and pinpointing special moments in history.

Her first memory is the coffee aroma in her family home during the Second World War before remembering the freezing winter of 1947, Queen’s Coronation, the World Cup win of 1966 to more up to date of first British woman in space in the 1990s and the summer floods in 2007.

In addition to moments in history, Beryl’s poem lists the everyday events that have been made more pleasant by a mug of Nescafé Original such as coffee mornings, business meetings and chatting with friends.

Aline Dezileau, Nescafé Original brand manager said: “The team were bowled over when we received the letter from Beryl – it was such a beautiful and kind gesture which summed up perfectly how Nescafé Original has been there throughout her life. She’ll forever be known as the Nescafé Original Poet Laureate around here.” 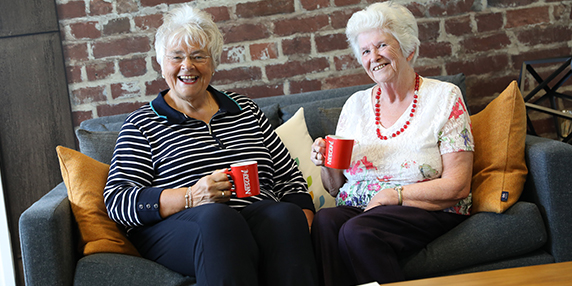 As well as being fondly known as the Nescafé Poet Laureate, Beryl and her friend Linda came to visit the Nescafé team at their offices near Gatwick airport. While there they enjoyed coffee tasting and discovered more about what makes a great cup of coffee. The pair left feeling like coffee connoisseurs after. Beryl enthused after that the topic at her next coffee morning meeting would be coffee! 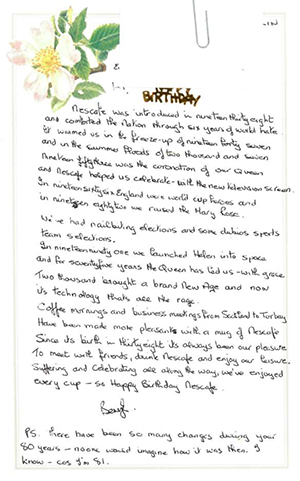 A poem by Beryl Chaplin from Basingstoke: click to expand (pdf, 205Kb)

Coffee mornings and business meetings from Scotland to Torbay

Have been made more pleasant with a mug of Nescafé

To meet with friends, drink Nescafé and enjoy our leisure

Suffering and celebrating all along the way, we’ve enjoyed every cup – so Happy Birthday Nescafé