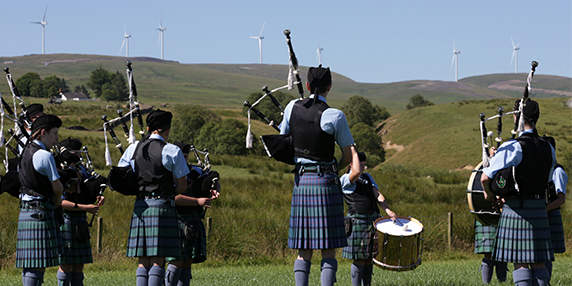 The farm, developed in partnership with energy business Community Windpower, is made up of nine turbines which, combined, are now producing around 125GWh of power per annum. That’s enough to supply half the annual electricity demands of all Nestlé’s UK and Ireland operations.

Each year, enough electricity to power 30,000 homes will be delivered back to the National Grid, meaning that Nestlé is now contributing directly to the de-carbonising of the UK and Ireland’s electricity supply.

Speaking as he officially opened the wind farm today, Stefano Agostini, CEO Nestlé UK and Ireland said: “I’m proud that Nestlé is doing the right thing and directly contributing to the reduction of carbon here in the UK and Ireland. We all have a part to play in reducing climate change and its effects while making sure that we safeguard our planet’s future.

“Scottish onshore wind is highly productive and Sanquhar will deliver over 45% capacity factor which will be supplied to the grid, thereby reducing fossil fuel generation. Global warming is becoming more obvious every day and it’s great to see a company as influential as Nestlé making a stand for the environment.” 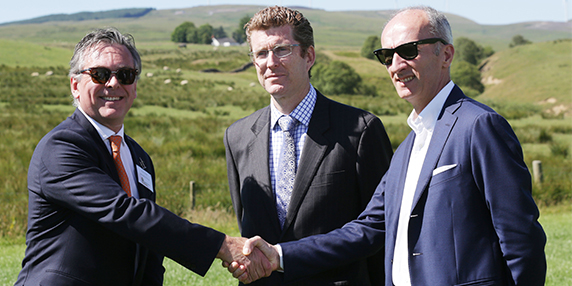 The project has been welcomed enthusiastically by the local community in rural Sanquhar in Dumfries & Galloway and received no objections at all throughout the planning process. The scheme will contribute annually to a local community fund managed by Community Windpower, which will help provide economic, educational, environmental and social benefits for the lifetime of the wind farm. On site, a host of biodiversity protection and enhancement measures have been put in place to ensure local wildlife prospers alongside the new farm.

Ecological surveys ensured that important habitats and species were not affected by the construction of the windfarm. This included avoiding the Black Grouse lek where the males display to each other and nationally important blanket bog. Many attenuation ponds were dug during construction to catch silt, these have been left in site and have attracted frogs, damselflies and whirligig beetles. Baskets have been put up in the trees next to moorland for Merlin to nest in. There are a suite of habitat improvements currently taking place including wetland improvements and tree planting, all designed to make the wind farm better for wildlife.

Nestlé has made a global commitment to procure 100% of its electricity from renewable sources such as solar, wind and hydropower within the shortest practical timescale. Having met this target in 2016, Nestlé in the UK and Ireland is now leading the way for others with the opening of its own wind farm in partnership with Community Windpower, are now able to supply sustainable electricity back into the grid.