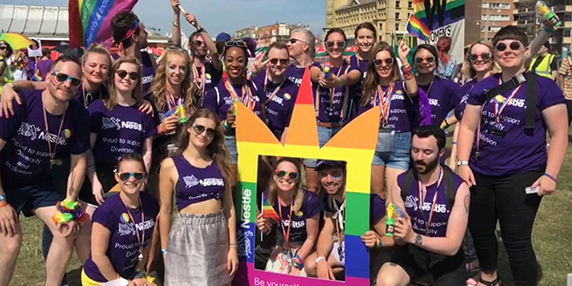 In a first, Nestlé UK joined Pride in Brighton this weekend, around 25 members of the LGBT+ Network and their allies joined the parade. They proudly waved the Nestlé flag emblazoned with the pride rainbow through the seaside city, which was awash with supportive crowds – many of whom cheered on Nestlé for joining Brighton Pride, the closest Pride to our Gatwick HQ.

The network walked in scorching heat as the precession set off from Hove Lawns through the city centre to Preston Park where Nestlé had an information stand in the Community Village, manned by LGBT+ Network volunteers who were able to take questions about the business.

Howard Crosskey from the LGBT+ Network said: “Nestlé’s involvement in such a high profile, internationally renowned event marks a real milestone for our Network, which was set up to ensure Nestlé is a great place to work for people who identify as LGBT+.

“In just under two years, the group have achieved so much. As well as Brighton and York Prides, we’ve also become Stonewall Diversity Champions, which means Nestlé UK has access to expert specialist advice from the UK’s leading LGBT+ rights charity on a whole host of issues that matter to the community.”