KitKat features in BBC2’s ‘Made in Great Britain’ 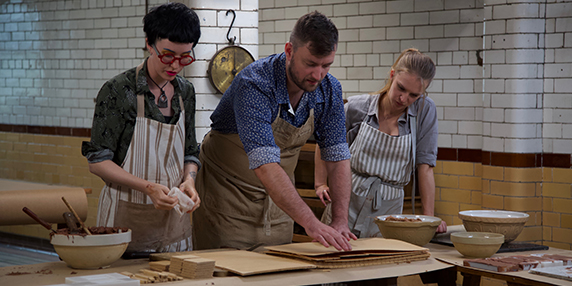 KitKat and its home, Nestlé’s York factory, starred in a new BBC Two television series ‘Made in Great Britain’.

Presented by Steph McGovern, the series tells the story of how craft and manufacturing skills have shaped the country's towns and cities and built modern Great Britain. The show trails the history of these industries up to the present day and follows a group of people ‘the makers’ challenged to make products from the past, by hand.

The second episode, which aired on Friday 2 November, focuses on chocolate and traces our love affair with chocolate back to York where chocolate was transformed from a luxury drink for the rich into the nation's favourite treat. The episode takes viewers through the ages following the history of how chocolate making came to be so prominent in York and explores the success of the York-invented KitKat as one of the best-selling products of all time.

KitKat was invented at the Rowntree’s York factory in 1935 as Chocolate Crisp, a chocolate bar for lunch boxes of the workers of Britain. By using wafer to fill the product, Rowntree’s kept the price below that of a solid chocolate bar creating a product that was more affordable for a working man, putting an end to the era of chocolate being exclusively available for the rich.

Since then KitKat has become one of the most successful chocolate bars in the world and currently more than four million KitKat bars are made every day at the Nestlé’s York site.

In the episode ‘the makers’ are tasked with making a KitKat by hand which turns out to be more challenging than they expected. Steph and the crew are given a special, behind the scene access to the Nestlé’s York factory to see how KitKat is made now, and learn from Gary Barnes, Expert in KitKat and Wafer Technology, how Nestlé manages to produce enough KitKats to feed the nation.

If you missed the episode, you can watch it now on the BBC iPlayer here.

Have a look here to find out more about the history of KitKat.

To learn more about York, its chocolate heritage and the role Nestlé plays as a proud part of the community have a look at our video here.

If you want to learn about Nestlé’s innovations, and how Nestlé’s Product Technology Centre invented a new type of chocolate bar, watch our videos here.