Get on your bike for a wheely good cause 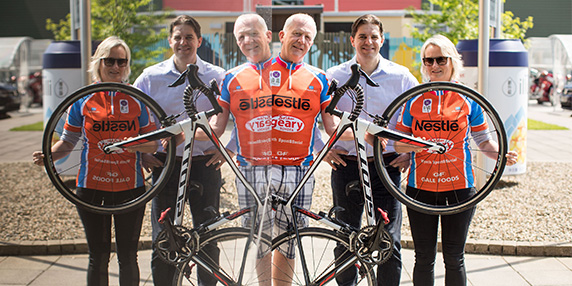 Askeaton Touring Club recently launched their upcoming charity cycle that aims to raise over €20,000 for Down Syndrome Ireland. Supported by Nestlé's Wyeth Nutrition plant, Askeaton, Co. Limerick, the annual 170km cycle over two days in June has been running for a whopping 30 years raising over €1million for a range of charities since 1988. The club started as an idea from a small group of Wyeth colleagues, expanding over the years to involve some 120 people on average at the yearly event. The 2018 ATC charity cycle is taking place on Saturday 23rd and Sunday 24th June and there are still places available for anyone interested in participating for part of the route on either of those days.

For the past year, over 700 employees from Wyeth Nutrition and Nestlé Ireland have been engaging in various staff initiatives to achieve their €70,000 target during the two-year partnership.