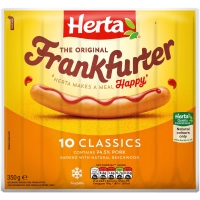 Frankfurters are the ultimate family meal: tasty, inexpensive and quick. They are smoked with natural beechwood which gives them the delicious and distinctive flavour that kids and adults love.

They’re so versatile – you can bake, grill, fry, microwave or even barbeque them. Frankfurters are a good source of protein and can be frozen for up to 3 months which makes them a great stand-by meal.

In 1852 in Frankfurt, The German Butcher's Guild introduced a perfectly spiced and smoked sausage that was packed in a thin skin – surprisingly they called it a "frankfurter".

Continuing the naming theme, Herta comes from the German town of Herten, where Ludwig Schweisforth opened his first butchers shop in 1902. This local shop flourished and grew into a factory. In 1947 Herta as we know it was born.