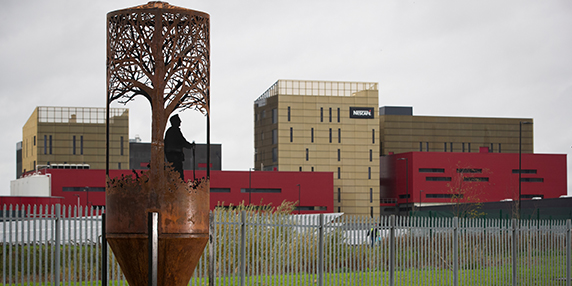 A new attraction celebrating the history and village community of Hatton in south Derbyshire has officially opened on land adjacent to Nestlé’s Tutbury factory. Easily accessible on foot from Church Avenue in Hatton, the Salt Brook Heritage Trail is made up of four sculptures inspired by the global industries that started in the small rural village.

An accompanying film, with oral histories from local residents and former industry workers was produced and shared with the four celebrated artists, Rachel Carter, Graeme Mitcheson, Dan Rawlings and Alex Blakey, as part of their research into the scheme. 25 unique memories have been captured, including that of Nestlé Tutbury factory employee Frances Toye, an avid local historian whose late husband Peter, researched, gathered and protected many of the images and archive material used in the project. Frances, a nurse by training, worked in the Occupational Health department at the factory and recalls fondly the onsite sports and social club where the factory had its own men’s and women’s football teams who would play against other factory’s in the area. Frances worked at Nestlé Tutbury for 35 years and was on site last week to officially open the new trail. Recalling her retirement Frances said: “At my retirement, colleagues and friends joked the factory will fall down without me there! Later that evening, I’d been for dinner with my husband and as we passed the factory on our way home, he joked, look Frances, factory’s still standing! How we laughed. It was great to share my memories with the project and come together to remember Hatton’s past.”

Nestlé has been supportive of the project since its inception and as well as providing financial support it has allowed land situated at the rear of its factory site to be opened up to the public and used as part of the heritage trail.

Nestlé Tutbury Factory Manager, Eric Heusler said: “At Nestlé we pride ourselves on being part of the local communities where we operate. We are delighted to support the Salt Brook Heritage Trail and help share and celebrate the wonderful heritage of our factory, the village of Hatton and its people.”

The project has been organised by Friends of the Salt Brook Trail with support from the arts group People Express and funded by the Heritage Lottery Fund, Nestlé and South Derbyshire District Council.

Hatton vs Tutbury – Nestlé’s Nescafé factory is on the Hatton (Derbyshire) side of the River Dove which forms the boundary with Tutbury (Staffordshire). However, the site is officially called Nestlé Tutbury. This originates from the long history of the site – which began as a dairy factory, making tinned milk from 1901. Back then the only Post Office that could be used to conduct business was across the county boundary in Tutbury, and so the name stuck, and around the world the factory is still referred to as Nestlé Tutbury, despite being officially in Hatton.

The Nestlé Tutbury factory was originally built in 1901 to produce condensed milk. In 1959 the plant underwent its first transformation and started to manufacture Nescafé soluble coffee. In recent years upwards of £350 million has been invested into Nestlé Tutbury, now a global ‘Coffee Centre of Excellence’. Products currently produced at Tutbury include Nescafé Gold, Nescafé Original, Nescafé Dolce Gusto and Nescafé Azera.