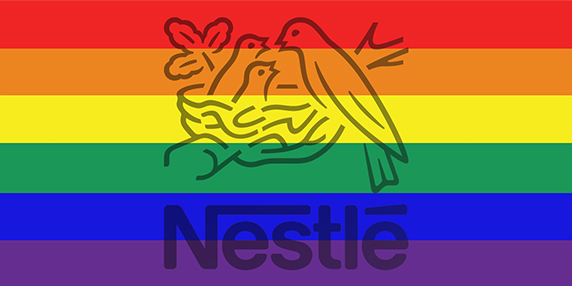 Nestlé UK and Ireland, part of world’s largest food and beverage company, has joined the Stonewall Diversity Champions programme as a sign of its commitment to improving inclusion for Lesbian, Gay, Bisexual, Trans, Queer and Plus people (the ‘plus’ represents additional sexual orientation & gender identities). The scheme provides Nestlé, which employs around 8,000 people at factories and offices across the UK and Ireland, with access to the latest expert support & resources from the world’s formative LGBT+ charity.

Research by Stonewall shows that the legislative and social landscape is continually changing for LGBTQ+ people, sometimes for the better, but often for the worse. Despite recent progress in the UK, many LGBTQ+ people still face discrimination on a daily basis. This poses serious legal, ethical and practical challenges to employers like Nestlé UK & Ireland who want to build upon and uphold their inclusive values. In signing up as the Stonewall Global Diversity Champions, Nestlé joins a network of businesses and organisations committed to improving inclusion for LGBT+ people within the workplace. Nestlé will also take part in the annual Stonewall Workplace Equality Index, the UK’s definitive benchmarking tool for employers to measure their progress on LGBTQ+ inclusion in the workplace.

Stefano Agostini, CEO for Nestlé UK & Ireland said: “I’m proud that Nestlé has signed up as Stonewall Global Diversity Champions. This is an important programme that, alongside our own initiatives to attract and retain the best talent, will help us ensure all of our LGBTQ+ colleagues feel accepted without exception in all our workplaces.”

In addition to the Stonewall commitments, Nestlé’s LGBTQ+ Network of employees will be marching alongside their allies at Gay Pride festivals located near key operations this summer, at York Pride in June and Brighton Pride in August.