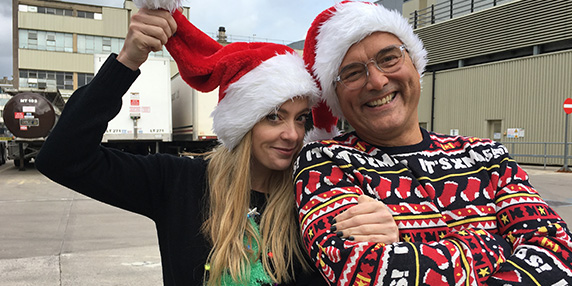 Nestlé’s Halifax factory will star in this year’s festive episode of the BBC Two’s 'Inside the Christmas Factory', which will see Gregg Wallace and Cherry Healey following the production of Quality Street, Nestlé’s famous chocolate assortment.

Gregg Wallace and his team spent three days at Nestlé’s factory, where Quality Street has been made since 1936, and were given special, behind the scenes access to see how some of the nation’s favourite Christmas sweets are made.

In this special episode, Gregg follows the production of the Toffee Finger, Orange Crunch and Strawberry Delight from start to finish.

Gregg will be seen helping unload a tanker with 20 tonnes of liquid chocolate heated to 50 degrees Celsius, one of twelve daily deliveries of chocolate from Nestlé’s factory in York where it is made. He will then see how, in just one hour, 800 kilograms of toffee is cut into precise 10mm x 55mm sticks before disappearing under a chocolate waterfall. He will also follow the Orange Crunch centres as they make an epic 45-minute journey along 400 metres of conveyors before seeing 115,000 strawberry fondants heading into wrapping. Finally, viewers will see the sweets being packaged and the festive tins of Quality Street being loaded on to the lorry ready to hit supermarket shelves all around the UK.

Nestlé’s Halifax factory produces up to twelve million Quality Street sweets every single day in the run up to Christmas and a staggering two million festive tins and more than thirteen million Quality Street tubs each year. With 5,500 individual chocolates packaged and dropped into tins every minute, viewers will see Gregg and his team follow the process that has been putting colour into the UK’s Christmas for more than 80 years.

Talking about his experience from the filming set, Chris Atkinson, Communications Manager at Nestlé’s Halifax factory, said: “This has been an amazing project from the start to the finish, but nothing could’ve prepared me for the pride I felt watching our people going out of their comfort zone to share the process on film. They were all brilliant and I hope they feel the same when they sit to watch it with their families.”

Julie Maher, Technical Operator in Sweet Wrapping department, added: “It was a great experience working with Gregg. I was very nervous when we were filming but he helped put me at ease whilst on camera. We are delighted to show BBC viewers how we make our iconic sweets and I am really looking forward to watching it with my family now.”

Lee Healey, Technical Operator in Toffee department, said: “Making a programme about making sweets is very different from making sweets. The detail needed to explain what is second nature to us made it challenging but it was really great to work with the crew and Gregg seemed genuinely fascinated by our processes.”

The ‘Inside the Factory’ series is a celebratory look at British manufacturing and this is the third time Nestlé has contributed, following KitKat and Nescafé which starred in previous series.

KitKat fans will have the opportunity to see how their favourite confectionery is made this Christmas as the episode of ‘Inside the Factory’ following KitKat production will also be repeated this Christmas on Friday 28th December at 5pm on BBC Two.