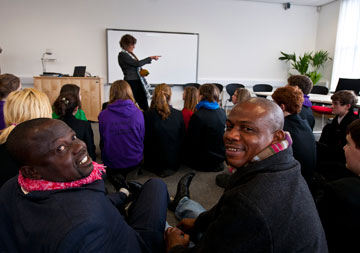 Cocoa farmer, Mr Kouame Fasseri has appeared on more than 400 million Fairtrade certified four-finger KIT KATs since January 2010. He will be visiting alongside Mr Fulgence N’Guessan, the head of the Kavokiva Co-operative, the farmers of which produce many of the Fairtrade certified cocoa beans for Nestlé Confectionery.

As part of the visit, the farmers were joined at Manor C of E School by Harriet Lamb, Executive Director of Fairtrade Foundation UK to meet pupils participating in the Archbishop of York’s Young Leaders Award’ aimed at 14-16 year old school children. The 23 students from Manor CE School have opted to complete this Award in Leadership over the next two years, which is to supplement their GCSE qualifications and will participate in an interactive session with the farmers and Harriet.

Later this year, a school built by Nestlé will be completed in Mr Fasseri’s village as a thank you for his support over the last two years.  This is part of The Cocoa Plan, a Nestlé initiative to invest over £65 million over the next ten years to address key farming, economic, social and environmental issues communities we work with face.

The three day visit included a tour of the Nestlé York site, following the arrival of cocoa beans from Cote d’Ivoire through to the production of the milk chocolate and on to the KIT KAT factory to see the bars come off the production line (imagery and film available on request).

The Archbishop of York, Dr Sentamu said: “I visited the Kavokiva Cooperative with David Rennie, Managing Director of Nestle in 2009. We saw the dedication and hard work of farmers such as Mr Fasseri and Mr N‘Guessan, upon whose life and work the company depends.   I think it is fantastic that these young leaders at Manor School will learn about the importance of the Fairtrade movement on KITKAT’s second anniversary, and how this is making a difference for the well-being of cocoa farmers and their families”.

David Rennie, Managing Director, Nestlé Confectionery UK & Ireland said: “The Nestlé Cocoa Plan was brought to life in the UK by our links with the Kavokiva Co-Op and Fairtrade certification of Kit Kat. I have seen for myself the difference it is making to the farmers and their communities and I am delighted that Mr Fasseri and Fulgence are in York to meet employees, see the Kit Kat factory and build even closer links between ourselves and the farmers of Cote d’Ivoire.”

Quote from Harriet Lamb: “Fairtrade seeks to connect farmers and workers who grow our food with the public who enjoy those goods. So it’s great marking the second anniversary of KIT KAT four-finger bar becoming Fairtrade, cocoa farmers from the Ivory Coast can visit the UK to see the whole process of chocolate production, to speak to Nestlé staff and to meet chocolate lovers and Fairtrade campaigners.  This is a rare and empowering experience for all involved.  It is a great step in the growing partnership between Nestle and the cocoa farmers, in this year when Fairtrade is asking everyone to Take a Step for Fairtrade in 2012.”