Nestlé has become a hive of activity as the first ever beehive has arrived in York.

Three un-bee-lievably passionate colleagues from across the business in the UK have worked together to install the new hive at the historic site in the city.

The bees arrived at the campus last month and have been buzzy collecting enough nectar for the first ever Nestlé York honey and, now there are around 60,000 bees in the colony! Honey produced will be used to spark innovation for new recipes and products at the global innovation centre for confectionery at Nestlé Product Technology centre right next to the bee’s new home. Employees can also make a donation for the honey and a seed bomb to plant in their gardens.

The hive is creating more than just a buzz at the site in recipe innovation, it is part of Nestlé strategy on biodiversity. Bees are vital to food production and the environment, yet their population is in decline in many regions. This scheme will give the UK bee population a boost and help improve biodiversity in the area.

The idea came from Antonio Abella, Arna Walker, and Elizabeth Skrzypecka in 2019. Although working in different areas across Nestlé, the inspiration for the idea came as part of a 30-day internal entrepreneurial challenge and the team worked virtually during the pandemic to make the idea a reality.

Antonio, whose surname means bee in Spanish regional language Galician, said he has always been passionate about bees. He said: "Bees are such fascinating creatures and play an important role in contributing to the environment. I am so excited to have been given the opportunity to train as a beekeeper and everyone we have worked with in the business has been so supportive in making this happen, from senior leaders to co-workers".

"We have also planted wildflowers around the area to support biodiversity even further and as a way for the bees and other pollinators to really thrive. Bees are vitally important, and we should be doing everything we can to protect them and the area where they live."

Louise Barrett, head of Nestlé Product Technology Centre said: "The first beehive on York campus is so important; it’s the culmination of passion of a small group of people and is also raising awareness of the important role bees play in biodiversity and Nestlé’s sustainability journey."

The bees live in a purpose-built safe and secure area next to the York Nestlé Product Technology Centre and are cared for by three Nestlé employees, who are now trained beekeepers.

The hope is the 'Bees at work' programme will be rolled out across all appropriate Nestlé sites in the UK and Ireland. Elizabeth added: "We are proud of the first steps that we have taken in York and we look forward to continuing to build the initiative across other Nestlé sites in support of biodiversity." 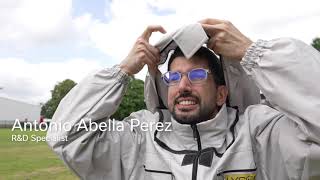