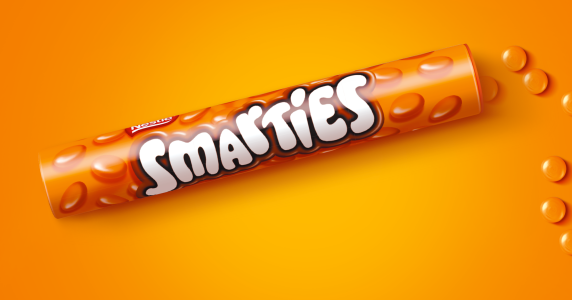 Giant tubes of Orange SMARTIES are Nestlé’s offering to the UK this Christmas after overwhelming demand sees them introduced for 2017.

Giant tubes of SMARTIES are a staple of the Christmas season and make for a perfect stocking filler but Nestlé has taken things to the next level this year with giant tubes made up entirely of Orange SMARTIES now available in ASDA.

Nestlé’s crack team of consumer service experts, based in York, receive more than 500 contacts from consumers every day and, for decades, have been inundated with requests from people up and down the land all asking the same thing: “Where can I buy Orange SMARTIES?”

Iain Beavis, Seasonal Confectionery Manager at Nestlé said: “It simply got to the point where we had to make it happen. The orange ones are the only SMARTIES that have their own flavour and they have their very own cult following because of that.

“The distinctive flavour also means that manufacturing them in high volume, on their own, is slightly more difficult to do given the different process and recipe required to get that orange-y taste. Our experts have been hard at work to make it happen so that 2017 is the perfect Christmas for fans of Orange SMARTIES.”

The tubes are exclusive to ASDA stores across the country but fans should move quickly. The limited run is expected to sell out before the holidays arrive so it is worth getting this particular kind of Christmas shopping done early in order to avoid disappointment.

Chocolate covered in a sugared shell is one of the oldest forms of chocolate sweet in the world. The name SMARTIES has been around since 1937 when Rowntree’s renamed a product that had previously been known as Chocolate Dragée or Chocolate Beans. SMARTIES remain incredibly popular to this day and their array of vibrant colours have been manufactured without artificial flavours or colouring ever since 2006. The orange Smartie uses orange oil to give it its distinctive taste.

Giant tubes of Orange SMARTIES are not the only treat that Nestlé is unleashing on the nation this Christmas.

• This limited run of Giant tubes of Orange SMARTIES is exclusive to ASDA and on sale now.