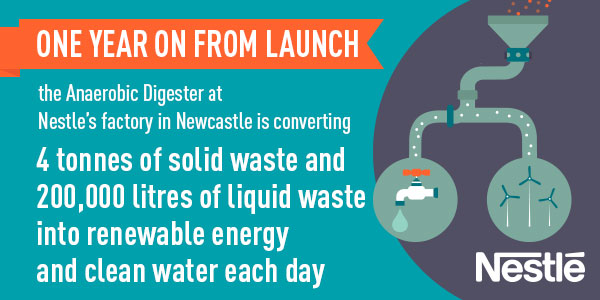 One year on from its official launch, the anaerobic digester at Nestlé UK & Ireland’s Fawdon factory, Newcastle upon Tyne, is converting four tonnes of solid waste and 200,000 litres of liquid waste into renewable energy and clean water each day.

• Home to famous brands including Rolo, Toffee Crisp and Caramac, the factory in Fawdon turns sweet waste into a ‘chocolate soup’.

• This ‘soup’ is then fed into an airtight tank, the anaerobic digester, where bacteria decomposes the material and converts it into by-products such as the renewable energy, biogas.

• The biogas produced fuels a combined heat and power engine, which produces 200kW of electricity, meeting about 8% of the sites energy needs.

Since launch a year ago, the system has also significantly improved the quality of the water discharged from the factory. The equivalent of 41 Olympic-size swimming pools of clean water has been released from the site in the past year.

Greenhouse gas emissions at the factory have also improved, falling by approximately 10% as a result of the heat and power generated from the biogas produced at the Fawdon site.

“We’re proud to announce that one year on from launch, we’ve achieved our target of zero waste to landfill at our Fawdon factory, thanks to the installation of a new anaerobic digester.

"The system allows us to convert a large amount of waste that would otherwise enter sewage, used as feed stock or landfill systems and generate methane and other greenhouse gas emissions.”

The digester at Nestlé’s biggest UK factory in Fawdon, was introduced as part of Nestlé UK&I’s commitment to achieve zero waste for disposal in 10% of its factories by 2015, a target achieved two years early in 2013.
Across Europe, Nestlé is increasing its zero waste commitment, guaranteeing all of 150 factories do not send waste to landfill by 2020.

To help reduce the company’s carbon footprint and improve the environmental impact of the Fawdon factory, Nestlé turned to UK based renewable energy experts Clearfleau to build a bespoke industrial anaerobic digestion system.

About Nestlé UK & Ireland
Nestlé UK & Ireland, a subsidiary of Nestlé SA, the world’s leading nutrition, health and wellness company, is a major player within the UK and Irish food industry employing 8,000 employees across 20 sites.

We are proud to produce some of Britain’s best loved brands such as Kit Kat, Nescafé, Smarties, Buxton, Go Cat and Shreddies.

We are one of the UK and Ireland's food industry’s major exporters, exporting over £350m worth of products every year to over 70 countries around the world.