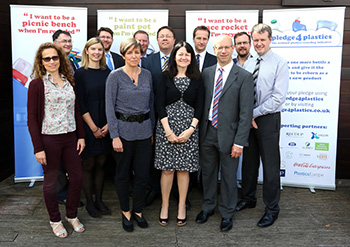 The initiative is in response to challenging recycling targets set by UK Government for the packaging industry for the period 2013-17 which mean recycling levels need to double over the five year period.

"Nestlé are very proud to be supporting the Pledge 4 Plastics initiative. Working together on the campaign, we have developed a clear communication plan that will help to increase consumers understanding of plastic recycling and hopefully have a positive effect on the amount of plastic packaging recycled in the UK."

“Nestlé Waters is delighted to be involved in this ground breaking initiative, which has seen people from a cross sector of responsibilities come together and pool areas of expertise to launch such a joined up campaign. It is encouraging to see that, when dealing with complex topics such as recycling, collaborations can work and Pledge 4 Plastics will hopefully deliver some great results for society.”