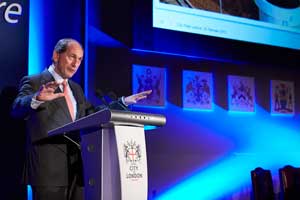 Nestlé Chief Executive Paul Bulcke has been made an Honorary Freeman of the City of London, the highest honour the City can bestow. He now joins a list of distinguished Honorary Freemen including Lord Nelson, the Duke of Wellington, Prime Ministers Disraeli, Winston Churchill, Margaret Thatcher and members of the Royal family.

Mr Bulcke was nominated by Alderman Sir Paul Judge for Nestlé’s continued support of the food industry.  To receive the Freedom Mr Bulcke read aloud the Declaration of a Freeman in front of seven Livery Masters.
At the end of the ceremony, which was also witnessed by His Excellency Mr Anton Thalmann, Ambassador of Switzerland to the UK, Mr Bulcke signed the Declaration Book and was presented with a sheepskin parchment document known as the ‘Copy of Freedom’.

He said: “Being made an Honorary Freeman of the City of London is a great honour and I feel deeply privileged to receive this great accolade on behalf of Nestlé.”
Historically it is believed that receiving the Freedom of the City enabled you to set up a market stall in the City, be married in St Pauls and drive sheep over the bridges across the Thames.  Nowadays the privilege relates more to an educational and charity nature.

Following the ceremony yesterday (25.2.13)Mr Bulcke delivered the key note speech at the 13th City of London Food Lecture in front of an audience of 600 invited guests including HRH The Princess Royal.

Mr Bulcke addressed how global companies must face up to the challenge of resource scarcity, particularly water shortage.  His lecture was followed by a question and answer session with a panel of eminent food industry specialists chaired by Sheila Dillon of BBC’s The Food Programme.  The panel included Chris Shearlock, Head of Sustainability at the Co-Op; Carl Atkin the renowned agricultural economist and Professor Tim Benton is the “Champion” for the UK’s Global Food Security.

Laurence Ollins, Chairman of the Organising Committee said: “We are delighted that we have been able to offer Paul Bulcke the honour of the Freedom of the City and that he has also accepted our invitation to give the keynote speech at the 12th City of London Food Lecture.”

The City Food Lecture event has become an established fixture in the calendars of both the food industry and the City of London, and attracts an audience of more than six hundred to Guildhall.  It is organised annually by the seven City Livery Companies whose roots are in the food industry – the Worshipful Companies of Bakers, Butchers, Cooks, Farmers, Fishmongers, Fruiterers and Poulters.