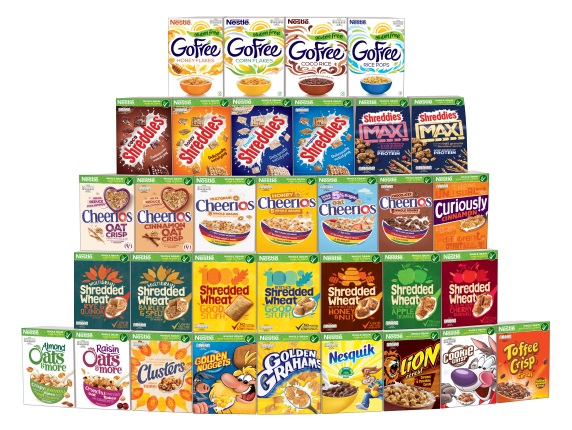 Nestlé Breakfast Cereals, made by Cereal Partners Worldwide (UK), is committing to reduce a further 10% in the average sugar content across its cereal range by the end of 2018.

This move will see around 225 million fewer teaspoons of sugar in the nation’s diet as part of an ongoing programme to reduce average sugar across the product portfolio. These changes will be achieved through a combination of reformulation and by growing the share of lower sugar variants. Since 2010, Nestlé Breakfast Cereals in the UK has already reduced its average sugar content by 15% across the portfolio.

Gharry Eccles, UK Regional Vice President of Cereal Partners Worldwide said:
“We believe breakfast is the most important meal of the day and our cereals provide vitamins, minerals and fibre to the diet. We also know that breakfast cereals can play a part in the efforts to reduce sugar consumption across the nation.

“Offering consumers healthier and tastier cereals is one of our top priorities and we are determined to make breakfast even better for everyone.

“We’ll take every opportunity to drive forward improvements across our range. For example, by the end of this year, our cereals will be free from artificial flavours and colours across our entire product portfolio. Making these improvements is crucial to us offering better choices for our consumers while retaining the same great taste.”

Notes to Editors
1. Cereal Partners Worldwide (UK) makes Nestlé Breakfast Cereals.
2. Nestlé Breakfast Cereals include; CHEERIOS, CLUSTERS, COOKIE CRISP, CURIOUSLY CINNAMON, GOLDEN NUGGETS, GOFREE, GOLDEN GRAHAMS, NESQUIK, SHREDDIES and SHREDDED WHEAT.
3. Nestlé Breakfast Cereals have been making breakfast better by reformulating across the cereals range for over a decade. Compared with 2003 levels, Nestlé Breakfast Cereals sold in the UK in 2016 contained 383 million fewer teaspoons of sugar, 42 million fewer teaspoons of salt and an additional 3,600 tonnes of whole grain.
4. Eating wholegrain and higher fibre cereals is recommended by the NHS to meet the UK dietary recommendation for fibre
5. The aim is to achieve a further 10% reduction in average sugar between 2015 – 2018. This builds on an existing 15% reduction in average sugar achieved between 2010 – 2015.
6. This pledge follows an announcement earlier this year from Nestlé UK and Ireland who are stripping out 10% of sugar from across its confectionery range by 2018. More information can be found here;
http://www.nestle.co.uk/media/pressreleases/stepping-up-to-the-sugar-challengeuk