Nestlé York Engineering Apprentice, Jordan Phillips (pictured centre), has scooped the ‘York Apprentice of the Year’ (aged 16-24) award at a ceremony in York Minster.  The awards, held last week, were organised by The York Apprenticeship Hub, a City of York Council led partnership with training providers and the National Apprenticeship Service. 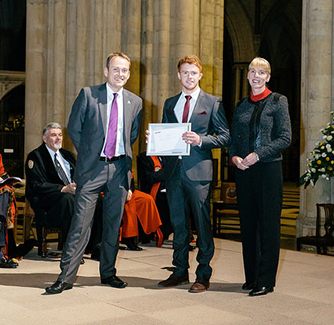 Facing stiff competition for the title from a wide variety of apprentices, including a York Minster stonemason, the judges were particularly impressed with Jordan’s personal passion of promoting apprenticeships externally.

He is a Food & Drink Federation National Apprentice Ambassador and has spoken enthusiastically with MPs in Westminster on the benefits of apprenticeships – as well as promoting the apprenticeship scheme at Nestlé at local events around York.

Having completed his Apprenticeship this summer, Jordan is now progressing to a fully funded engineering degree at Sheffield Hallam University, underlining Nestlé’s commitment to ensuring future talent grows to its full potential.

Nestlé UK Engineering Apprentice, Jordan Phillips said: “I am delighted and honoured to win the ‘York Apprentice of the Year’ Award. It really means a lot and the award has topped off a great year on my apprentice journey.  I have found my apprenticeship to be really rewarding and I look forward to continuing my career at Nestlé."