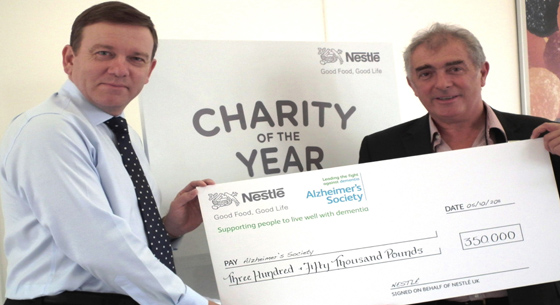 The company’s employees have spent a year from September 2010 undertaking a variety of activities to raise the money.  These have included a site-to-site bicycle challenge riding between Nestlé sites from Girvan in Scotland to Croydon in Surrey, taking part in marathons, the Three Peaks Challenge and treks overseas.  The company also ‘turned blue’ in April with staff dressed in blue wigs and clothes selling cakes and even blue custard!

Paul Grimwood, CEO & Chairman of Nestlé UK & Ireland, said: “I am proud that Nestlé employees have smashed our target.  The money we will help fund Alzheimer’s Society’s national dementia helpline and valuable research into finding the cause and a cure for dementia which affects over 750,000 people in the UK.”

“On behalf of everyone at Alzheimer’s Society I would like to say a huge thank you to Nestlé for its generous support. Every penny raised will support people to live well with dementia today and fund research to find a cure for tomorrow.  Nestlé has also helped increase awareness of dementia and we are all extremely grateful for the time and energy they have put in.”

• Croydon staff raised money through quiz nights, football tournament, wine-tasting evenings, raffles and a treasure hunt around the town
• Dalston factory employees organised the Nestlé Cappuccino ball raising over £13k, and spent a day at their local Tesco store bag-packing to raise more than £500
• A charity race day at Newcastle Races helped Fawdon factory with their fundraising efforts while some employees signed up for the Three Peaks Challenge
• Brave employees at Girvan raised money by climbing mountains taking part in Nestlé’s Site to Site Challenge and Mountain Balling
• Celebrating 75 years of Quality Street helped Halifax staff raise more than £5k by hosting a Quality Street Ball
• Hayes employee, Dom Dalton, ran 250 miles from York to Croydon in four days. That’s the equivalent of 10 marathons!
• A sponsored Skydive was one of the ways the team at Tutbury factory helped raise their money as well taking part in the Derby 10k run and organising a summer ball
• York site held a host of events from a Halloween ball raising £10k, competition to win a breakfast with diver and member of Team Nestlé Tom Daley to auctioning giant Easter eggs and chocolate shoes  as well as a Spinathon

• Nestlé is one of the UK food industry’s major exporters, exporting in excess of £260m worth of products each year to over 50 countries within the EU and the world
• Nestlé in the UK employs just over 6,500 people
• Seventy Nestlé brands are sold in the UK.