Nestlé UK & Ireland has supported the Government’s Public Health Responsibility Deal since its launch in 2011 and is a signatory to all the relevant Food Pledges including the calorie reduction pledge which supports our commitment to enable our customers to eat and drink fewer calories.

As a result of the programme of calorie reduction, Nestlé UK & Ireland announced in June that it is on track to have no single serve confectionery products over 250 calories by the end of 2014, ahead of the Industry target of Spring 2016. Currently 89% of our confectionery products contain 250 calories or less per serving. We will be making further announcements related to the products affected by these changes later this year.

As a major food manufacturer, we take our responsibility to help consumers lead healthier lives seriously. We continually reformulate our products to improve them nutritionally and aim to provide our consumers with the information they need to make informed food choices.  In total, 62%* of our confectionery now contain fewer than 110 calories per serving. 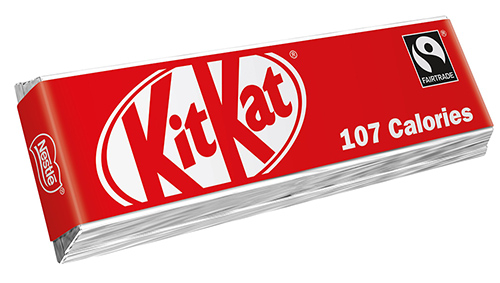 Nestlé also adopted the Government’s new labelling scheme in the UK as we recognise its importance to the public health agenda. Providing consumers with consistency in front of pack labelling is central to them using this information. The new labelling was rolled out from the beginning of the year.

In 2013, Nestlé UK and Ireland announced it had reformulated its iconic KIT KAT bar, resulting in the removal of 3,800 tonnes of saturated fat from the public’s diet, improving the nutritional profile of the product.

This reformulation means over a billion KIT KAT bars a year now have an improved recipe and was the result of three years of challenging research and development led by the Nestlé Innovation team based in York, the home of Kit Kat.

In 2011, we also became the first major confectioner in the UK and Ireland to remove artificial colours, flavours and preservatives from all of our confectionery. This pioneering move followed seven years of research to identify natural alternatives such as concentrates of fruit, vegetables and edible plants.

In April, Nestlé provided an update on the work it had done on the Responsibility Deal Calorie Reduction Pledge: