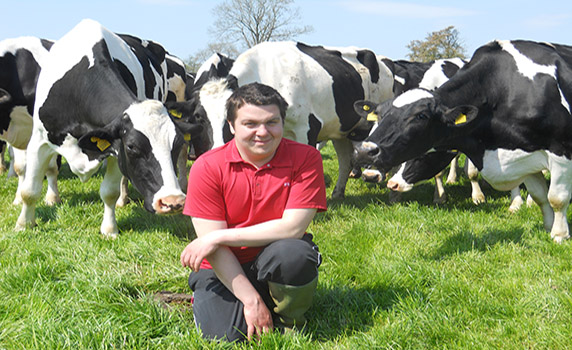 A farmer who supplies milk to Nestlé Dalston in Cumbria, has won the top prize in the prestigious Kidworth Dairy UK Case Study Competition.

26 year-old Paul Barrow will fly to Australia on 13th May to compare UK dairy farming with the challenges of the Australian cattle industry affected by drought. Over the ten day visit he will be looking at and reviewing different farming businesses and practices in the Outback to take back and share with the dairy industry in the UK.

Paul captured the imagination of the astute judging panel for the inaugural Agrihive Dairy Case Study Challenge because of his practical solutions and long-term suggestions.

Paul Barrow explained: “The way I attacked the case study competition was to read it and think about it while I was working – as soon as I got an idea I would write it down; test it to see if it worked”.

On winning the prize Paul said:  “I’m speechless. I’ve only been overseas once and I haven’t even got a passport.

“I’m very excited about going from the snow in Cumbria to temperatures as high as 42 degrees in Australia! I've only flown once before when I was 4 years old so going to Australia, especially to the Outback will be something completely different to what I’m used to.”

He added: “I’m hoping to compare what’s going on in the UK to what’s happening in Australia, looking for anything we can fetch back to the UK that would help improve the system.”

Also flying with him will be two runners-up from Savills and food and farming journalist, Philippa Hall.

Paul is one of the seven First Milk farmers taking part in the Nestlé’s Next Generation Dairy Leaders Programme, a unique scheme for young farmers that aims to identify, nurture and develop the next generation of dairy leaders.

His herd of 150 cows provides 3,700 litres of milk a day into Nestlé’s factory in Dalston where Nescafé Café Menu products, such as cappuccino and latte are made.

Congratulations Paul and have a great time in Australia!

Paul’s journey will be profiled on social media on @agrihive and @NestleUKI Twitter!