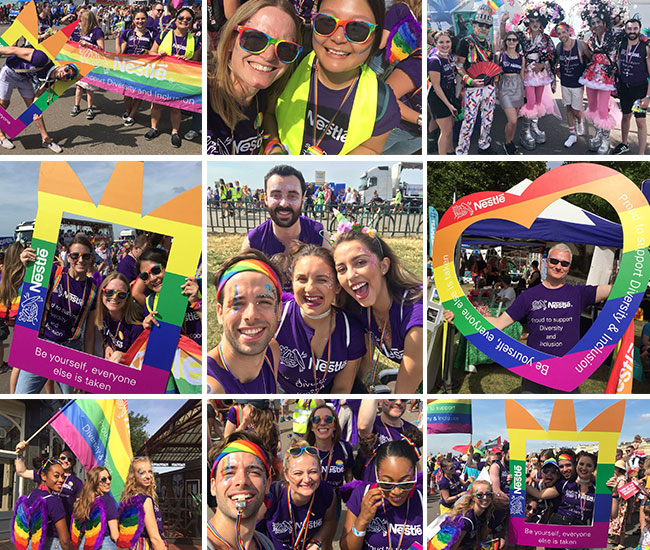 
Members and allies of Nestlé UK & Ireland’s Lesbian, Gay, Bisexual, Transgender and Plus (LGBT+) Network have announced they will join three Pride events in or nearby Nestlé workplace locations this summer. This year is a special one for the Pride movement, 2019 marks the 50th anniversary of the Stonewall uprising in New York where the clientele of the Stonewall Inn, fed up of the regular brutal police raids, decided to fight back. It marked the start of global Pride movement which has inspired millions of LGBT+ people to come out of the closet and live their lives without shame or fear.

The Network’s Pride season will start in York on Saturday 8th June, Nestlé’s Confectionery HQ, home of the iconic KitKat and workplace for around 2,500 Nestlé colleagues across a campus containing a factory, offices and world class R&D centre. This will be the third year the LGBT+ Network has participated in York Pride and Nestlé is again pleased to join the list of sponsors showing support for the LGBT community in York.

Later in the month on Saturday, 29th June, the Network’s focus will travel across the Irish Sea to join Dublin LGBTQ Pride, Ireland’s largest pride celebration which has been running since the 1970s. Nestlé has a team of around 800 people, based across its offices and Nespresso boutiques in Dublin and factory in Askeaton in County Limerick. This will be the first time Nestlé’s LGBT+ Network has participated in Dublin Pride.

To close the season, the Network will head to the seaside for Brighton Pride on Saturday, 3rd August. This will be the group’s second outing to Brighton Pride where this year they will join the parade with their own float. One of the world’s largest Pride events, the parade passes along the seaside, through the city and culminates with a huge celebration at the city’s Preston Park. The day’s celebrations will culminate with a show by Australian popstar legend Kylie Minogue. Brighton is the nearest city to Nestlé’s UK HQ beside Gatwick Airport and is home to many of the 1,000 or so strong team who are based there.

Keith Galbraith, Nestlé's Global Customer Director for Tesco and Co-Founder of the LGBT+ Network said: “Our LGBT+ Network in the UK and Ireland has grown in strength and numbers since we established a few years ago, from a conversation between two colleagues wanting to increase the visibility of LGBT+ people in the business to a fully-fledged Network making real changes across Nestlé. From our partnership with the LGBT rights charity Stonewall, to working with HR to ensure LGBT+ colleagues are considered in all relevant workplace policies – we have a lot to be proud of this Pride season. There is still more to do, but our work wouldn’t be possible without the support and encouragement of our Nestlé colleagues and allies. We can’t wait to parade with them this summer.”

At Nestlé, our values are rooted in respect - for our employees, our customers and consumers. That's why championing diversity and inclusion is so important to us; when we embrace different perspectives and give everyone the chance to be the best they can be, we can think in new creative ways that grow and enhance our business. Nestlé supports the UN’s LGBTI Standards of Conduct for Business and in the UK last year we signed up to become Stonewall Global Diversity Champions. The scheme provides Nestlé, which employs around 8,000 people at factories and offices across the UK and Ireland, with access to the latest expert support & resources from the world’s formative LGBT+ charity.