Nestlé Flag it Up at York Pride 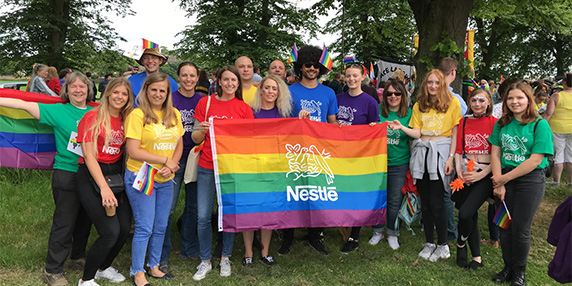 Nestlé staff from across the UK participated in York Pride again this year, proudly raising their flags in support of greater equality for LGBT+ people.

June is Pride Month and across the globe, events are taking place to celebrate LGBT+ people in society as well as raising awareness of the daily discrimination many still have to face. York Pride is North Yorkshire’s largest Pride and this year included representatives from the Armed Forces, including the British Army, the Royal Navy, and the Royal Air Force and staff from Nestlé.

In attendance this year were some of our Nestlé Academy employees, and representatives from across the business.

“It’s been another great year taking part in York Pride with the Nestle team demonstrating our commitment and support for diversity, inclusion and our LGBT+ staff. It’s fantastic to see another great turnout from across the business and be present in the huge parade. The York Pride event is a free, fun, community based event with a family orientated feel – it’s amazing to support where we can.” – Emma Scott, Business Solutions Specialist and LGBT+ Advocate 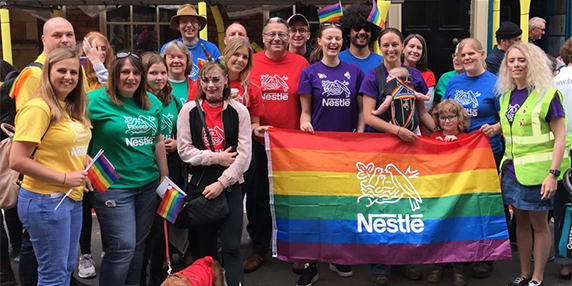 “As a current Placement student, it’s fantastic that there are so many opportunities to get involved in events such as Pride and it is really great that Nestlé support diversity and inclusion. This my second year attending the event and it’s a great occasion for Nestlé employees from different sites to come together, represent Nestle and show our support.” – Lily Rhodes, Business Applications Placement in the LGO

Supporting Pride Month, the RPTC raised their flag earlier this month and senior leaders around the business have flags on their doors showing their support to LGBTQ+ colleagues.

Next up, in August, Nestlé’s LGBTQ+ Network of employees will be marching alongside their allies at Brighton Pride.