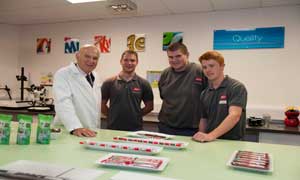 The Secretary of State for Business, Innovation and Skills, Dr Vince Cable MP paid a visit to Nestlé York on Thursday to meet apprentices and see for himself the investment and transformation the site has undertaken in recent years.

The Nestlé York site is one of the World’s largest confectionery factories and over recent years been transformed in a world class facility producing up to 6 million chocolate bars a day.  Nestlé has invested over £200 million into the site, £50 million in the last five years including a new AERO factory and upgraded KIT KAT wafer facility.

The Business Secretary Vince Cable was shown the Aero and Kit Kat factories where he met with Ed Wilson, and Jordan Phillips, engineering apprentices and Quintan Thornton who recently completed his apprenticeship and now a full time engineer.  The apprentice programme is only one part of the Nestlé Academy launched nine months ago.  Through the Academy, Nestlé UK & Ireland committed to double the number of graduates, apprentices and internships and supporting the economy through the training of skilled workers.

In 2011, Nestlé UK and Ireland announced an ambitious programme of investment in the UK to establish world class manufacturing.  The announcement included £310 million at Nestlé Tutbury, Derbyshire to extend the NESCAFÉ Dolce Gusto plant and create a state of the art Freeze Dried Coffee Factory for NESCAFÉ Gold Blend.   This year, the new £35m mineral water factory in Buxton started production.

The Business Secretary said of the visit: "It's been great to come to Nestle and see the investment they are making in their facilities. It's a testament to the excellent local workforce that they are upgrading their factories and continuing production in York.

"I was especially struck by the high-quality of their apprenticeship programme. We are keen to see even more young people training as engineers, and meeting these trainees at a chocolate factory just shows the diversity of engineering jobs in the UK."
Dr Cable’s Uncle, Mr R C Cable, worked at Rowntree’s for 48 years.   As a gift from all Nestlé employees, Dr Cable was presented with a cloth bound collection of two original Rowntree’s Cocoa Works employee magazines.  The 1957 and 1970 editions both include pieces on his Uncle, the latter marking Mr R C Cable’s retirement with a description of his career at Rowntree’s.

Vince Cable said: "Like most people from York, I have a strong connection with the company. As well as having an uncle who managed their box making factory, my own father also worked for Rowntree’s. The magazine is a great momento tracing my family's ties."