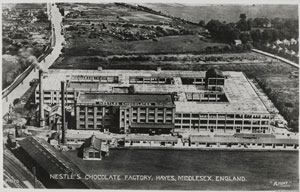 Nestlé UK has been a part of life in the UK since the 1860s. The company has its roots in three big organisations; Nestlé, the Anglo-Swiss Condensed Milk Company and Rowntree’s of York. The first two merged in 1905 and then took over Rowntree’s in 1988.

The Anglo-Swiss Condensed Milk Company was formed in 1866 and began importing condensed milk through a London agent. Popularity for their tinned milk quickly grew and they acquired their first condenser in Aylesbury in 1875.

Henri Nestlé’s story started in 1867 in Switzerland when he began producing infant formula for babies who couldn’t be breast fed. In 1868 he set up a sales office in London and began importing infant formula into the UK

In 1901 Nestlé opened its first UK factory and in 1905 merged with the Anglo-Swiss Condensed Milk Company. Before long the Nestlé name was appearing on infant formula, chocolates and tinned milks up and down the country.

In 1939 Nescafé was launched in the UK and was an ‘instant hit’ allowing consumers to enjoy quality coffee without having to go to the trouble of roasting, grinding or percolating.

Over the years other household names have also joined the Nestlé stable such as the Swiss food giant Maggi in 1947, makers of soups and sauces famous the world over, Buitoni in 1988, the Italian food favourite and some of the Continent’s most glamorous mineral water brands like Perrrier, San Pelligrino and Vittel in the 1990s. 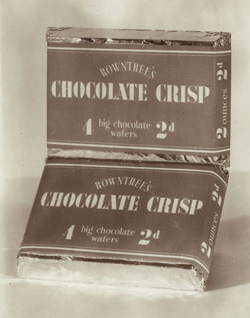 In 1988 Nestlé acquired Rowntree’s, the famous British confectioners. Rowntree’s was founded as a grocery business by Mary Tuke, a young Quaker, in 1725. Her business was eventually acquired by Henry Isaac Rowntree in 1862, who turned it from a simple cocoa works into confectionery company. Henry was joined in business in 1869 by his brother Joseph Rowntree who eventually took over.

Rowntree’s York firm has been responsible for many of the great confectionery brands that we know today, like Kit Kat, Aero, Smarties, Polo, Black Magic, Dairy Box, Fruit Pastilles and Fruit Gums. The Rowntree’s are not just famous for their confectionery; they’re also famed as leading Quaker Philanthropists. The Rowntree family built a model village just a mile north of their factory to give local people alternative accommodation to inner-city slum dwellings. Joseph Rowntree also set up four charitable trusts, one to lobby for parliamentary reform, another to run the model village, one to make charitable grants and a fourth to investigate the causes of poverty.

Nestlé is a major UK employer, we employ 6,500 employees across 20 sites. We are one of the UK food industry’s major exporters, exporting in excess of £260m worth of products each year to 50 countries around the world.