When Black Magic was launched in 1933, Rowntree’s were fighting their way back from one of the worst financial declines in the history of the firm.

Bankruptcy had looked like a very real prospect, just two years previously, when they had struggled to pay their shareholders any dividends. The Rowntrees were no strangers to financial problems. In fact, they had been close to bankruptcy in the 1860s, and made a loss in 1921.

By the end of the 1920s Rowntree’s could read the signs; it was very possibly the end of the line for the old firm. There was no such thing as a statutory redundancy pay-out, but they did set up a fund to help re-settle employees in new jobs elsewhere. It was their equivalent of sending out life rafts from a sinking ship.

It was against this backdrop, in November 1932, that the board of directors at Rowntree’s finally gave permission to launch a new boxed chocolate line: Black Magic. 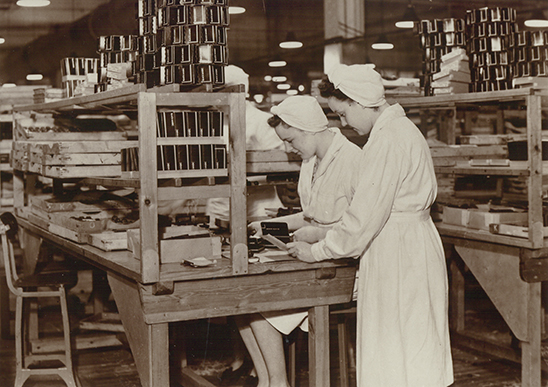 Fred Fryer (Sales Director) and George Harris – the irritable young firebrand that he’d made head of marketing for the “cake department” – were determined to launch a new kind of product. Not just another frilly box of Rowntree’s chocolates, no, they wanted to do what the Americans were doing; they wanted to launch a brand. They still weren’t sure about the name, but the board left it up to them to decide. Fred said that they would test consumer opinion on it.

Fryer and Harris did more than ask around for suggestions, they systematically interviewed 7,000 consumers and more than 2,500 shop keepers on every aspect of the box and its contents. With the help of the Walter Thompson company (now known as JWT) they built a brand that was set to sell like hot cakes and launch a marketing policy that, in the next few years, would bring about the creation of such classics as Kit Kat, Aero, Dairy Box, Polo and Smarties.

This is where the story gets really interesting, because the official records tell a completely different story to the tales from the people who were there at the time. The argumentative, strong-willed Scot (who would later be dubbed The Father of Modern Marketing) is given all the credit for the success of Black Magic in the company’s board minutes, but are the records wrong?

Recent interviews have revealed that Mr Harris was not all that heavily involved because it was not, in fact, his job. Harris was head of marketing for “cake” (what we would now call chocolate bars). Peter Rowntree, the quiet, unassuming grandson of the great Joseph Rowntree was in charge of “creams” (now known as assortments) and he remembered his work on the brand fondly. This begs the question; why was Peter Rowntree written out of history?

According to Peter Rowntree, they had considered including chocolate gingers in the original box, but found that ginger was the only sweet that a consumer would want to spit out right away if they didn’t like it. This wouldn’t be a problem with most boxes of chocolates, where consumers could see what they were choosing from a selection; but Black Magic was intended to be affordable enough to pick up on the way to the cinema and scoff in the dark with some friends. 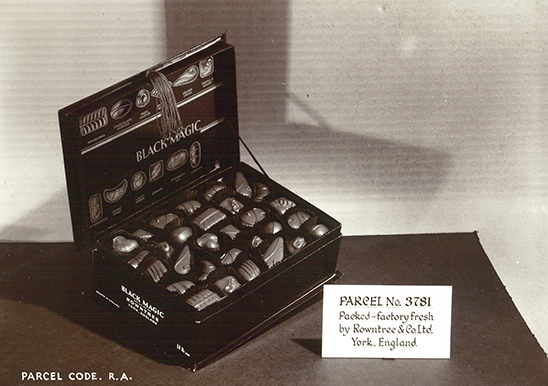 Regardless of who was responsible (Peter or George), the plain black box was launched in 1933 to a limited fanfare. There was just no money for advertising, and over the following years the board argued endlessly over whether or not it should have any advertising budget at all. The plan had been to save money on the brand by never advertising it, and saving money was incredibly important on a line where profit margins were so tight.

Until the 1930s, chocolate boxes were seen as a luxurious extravagance. Often presented in a handmade box, covered in silk and tassels, a “fancy box” as they were called, would often cost you more than the chocolates inside. The most expensive Rowntree’s chocolate box available in the 1930s was priced at 100/- (100 shillings). To put that into context we need to look at some other Rowntree records; back in 1936 Seebohm Rowntree conducted a survey in York to establish how many of the city’s residents were living in poverty. He made a record of the rental costs they were paying. At that time, for a working family living in a city slum dwelling, 10/- a week seems to have been about an average rent. Can you imagine how far out of reach a 100/- box of chocolates must have seemed?

Buying a girl a box of chocolates before the 1930s was tantamount to a marriage proposal for working-class people. Just take a look at the famous Ealing film Kind Hearts and Coronets; Dennis Price presents Joan Greenwood with a very small box of chocolates. Miss Greenwood insists that he shouldn’t have because he can’t possibly afford it. Mr Price isn’t destitute, he’s working as a shopkeeper. Admittedly he’s also a criminal mastermind, but Joan doesn’t know that, so it’s a good example of early twentieth century attitudes to confectionery. 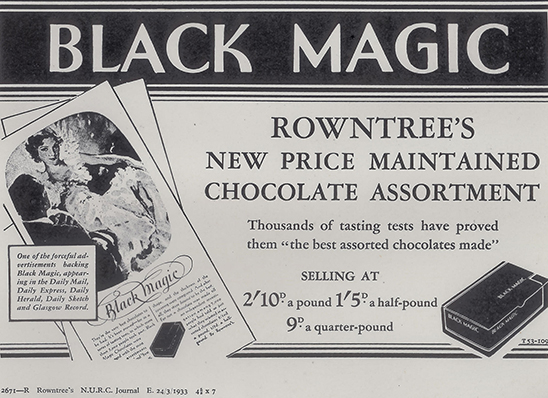 Rowntree’s wanted to change all that; they wanted to make a box of chocolates part of the early courtship ritual. And so, after long negotiations, an advertising budget was secured and they began the classic Black Magic campaign: the letters. 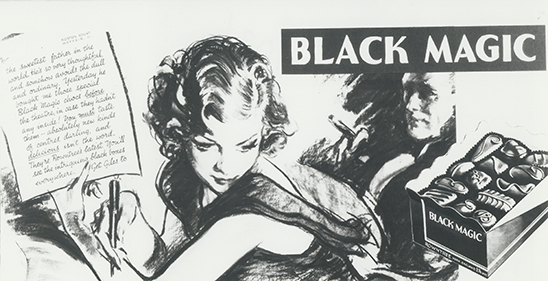 Millions of copies of newspapers carried the same image, a sophisticated society lady is writing a letter to her confidant and we are looking over her shoulder.

Back in the 30s, rules of propriety were set by “society hostesses”, the wives and daughters of nobility, or important public figures. Rowntree’s knew this and they were deliberately suggesting through these fictional letters that it was “the done thing” to buy a girl a box of chocolates as early as a second date.

Their strategy had a powerful effect on consumers, and sales of this plain simple box of chocolates increased by 100% in 1936. Sales continued to grow, but were interrupted by the Second World War. A wartime version was released briefly under the name “Carton” but discontinued quickly due to sugar shortages. 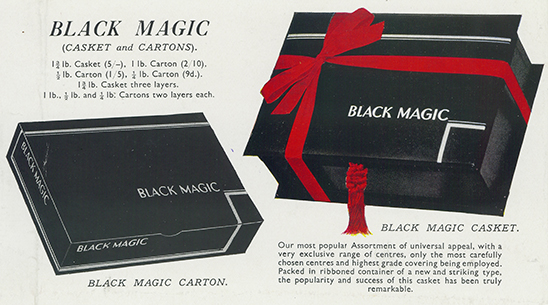 The brand’s re-introduction after the war was heralded by a series of up-to-date advertisements featuring those now familiar letters. The letters continued to be a feature of Black Magic advertising for decades to come.

Got a comment? Our archivist would love to hear what you think about this post. If you're not sure if your comment is right for this thread then check out our  House Rules