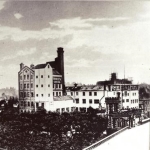 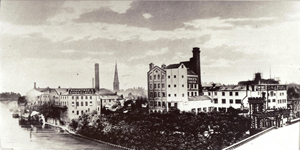 July 2012 marks 150 years since the Rowntree family started their cocoa business in York. The Rowntrees were a  Quaker family with strong Quaker beliefs. They built a chocolate empire from a small drinking cocoa business and changed the way Britons view, buy and eat chocolate, making it a regular purchase.

The Rowntrees built a model, garden village (New Earswick) on the outskirts of York to help city dwellers escape the York slums.

Seebohm Rowntree embarked on the first large-scale, scientific investigation into the causes of poverty in York. His findings influenced social policy at the time and Winston Churchill said of it “fairly made my hair stand on end”.

Rowntree’s is believed to have started making confectionery in the 1870s.  The early chocolates would have been bitter, dark chocolate, high in cocoa content and with a thick fondant centre, known as “creams”.

Left-over chocolate would have been used to make chocolate dragée (what we now know as Smarties).

York remains the head office for Nestlé Confectionery, producing over a billion Kit Kats per year. In addition it is also the home for Aero, Aero Bubbles, Polo, Yorkie and Milkybar.    Over £50 million pounds investment has been made in the last five years and it remains an important hub for the business with half the employees involved in Corporate functions rather than confectionery.   This includes the distribution centre, Nespresso’s Customer Relationship Centre and Nestlé Facilities.

York is also the location for Nestlé’s global centre for confectionery research in the form of the Product Technology Centre.  It is currently undergoing a multimillion pound expansion which will double its size – set for completion in September 2012.

Got a comment? Our archivist would love to hear what you think about this post. If you're not sure if your comment is right for this thread then check out our  House Rules